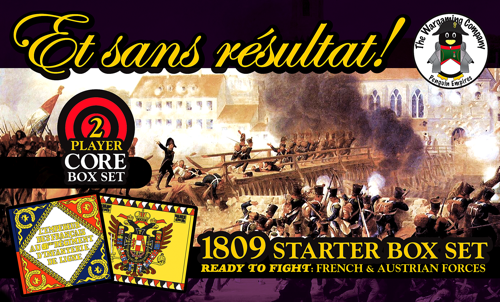 With Napoleon’s army engaged in Spain and Portugal, English bankers convinced the Emperor of Austria to attack Napoleon in Germany. Archduke Charles led the partially reformed Austrian Army, nearly destroyed by Napoleon in 1805, on a resurgent invasion of Bavaria. Meanwhile, Napoleon rushed the bulk of his Army from the Iberian Peninsular back into the heart of Europe to repel the invaders. Until he arrived, French Forces in Bavarian would have to fend for themselves.

This 1809 Box Set contains the basic elements to create two Forces: one French and one Austrian.

One French Force Commander with Staff

One Austrian Force Commander with Staff

Product designed for use with ESR Second Edition, may be compatible with other game systems but compatibility is not intended by design.

May contain lead and small parts, not suitable for children under 14. Contents may differ from photos provided here. Provided unpainted and unassembled.