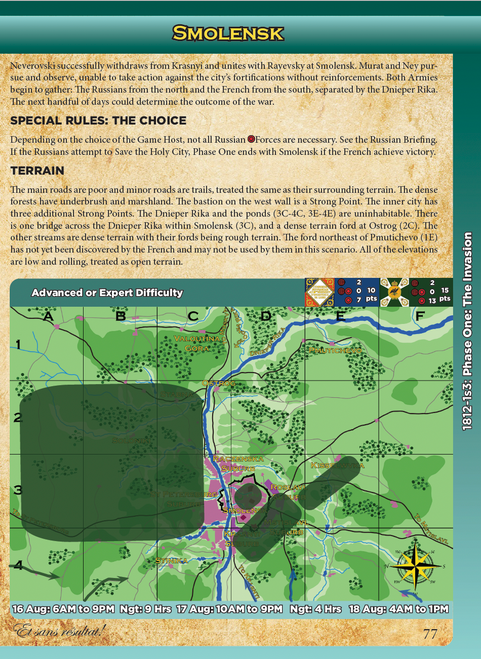 Smolensk is a complete sample scenario from Master of the World, 1812 in Russia, 1812-1 Series 3, available for pre-order today!.

UPDATED 18 AUGUST 2021 to match the soon to be released Master of the World, Series 3.

Smolensk could have been the turning point of Napoleon's invasion of Russia. After months of pursuing two Russian Armies, Napoleon had finally out maneuvered them at Smolensk – almost. A loan Russian division held back the flanking maneuver and bought time for Barclay de Tolly and Bagration to rush troops back to the Holy City of Smolensk.

Now the opposing Armies are gathering – will the Russians retreat again and Save the Tsar's Army or risk it to Save the Holy City?

The Battle of Smolensk spans three days: 16-18 August 1812, is suitable for ten or more players, and is played on a 4 x 6 mile battlefield.

This scenario is designed for ESR Napoleonics and compatible with nearly any Napoleonic wargame system. The map is given in scale miles, time is provided in time, and orders of battle can be easily converted to other systems.