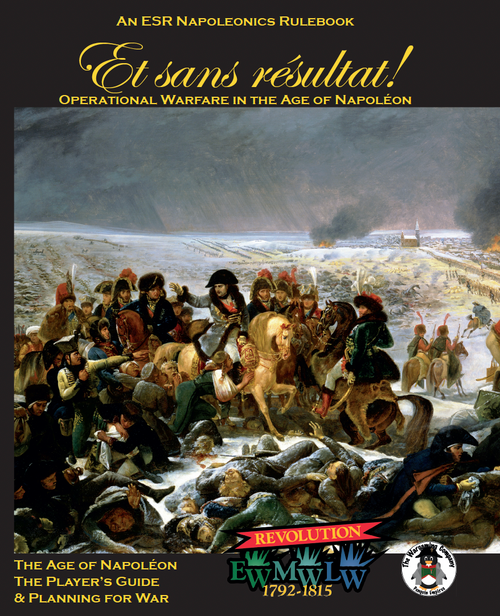 Et sans résultat! Series 3 is the newest edition of the perspective based operational-level Napoleonic wargame.

What a massacre! With no result!

Et sans résultat! recreates the battles and campaigns of the French Revolution & Napoleonic Wars. You can command Davout’s famous IIIeme Corps d’armée against twice its number at Auerstädt in 1806, or deal the Imperial French their first defeat at Aspern-Essling in 1809. Can you recreate Napoléon’s brilliant but risky Six Days’ Campaign, attacking Blücher’s 50,000 man Armee von Schlesien with only 30,000 men, and defeating it four times in six days?

History is about to be made... by you... Et sans résultat!

Three Books in One

The Age of Napoléon will bring introduce players to the personalities, events, factions, and military terminology of the Napoleonic Age.

The Player's Guide includes the Quick Start Guide to get players started and dedicated sections providing the nitty gritty of Command, Movement, and Combat.

Planning for War will help players plan out their own games, build their own Armies, Forces, and Formations, and 13 Starter Scenarios allow players to jump into an archetypical battle of nearly any part of the Napoleonic Age.