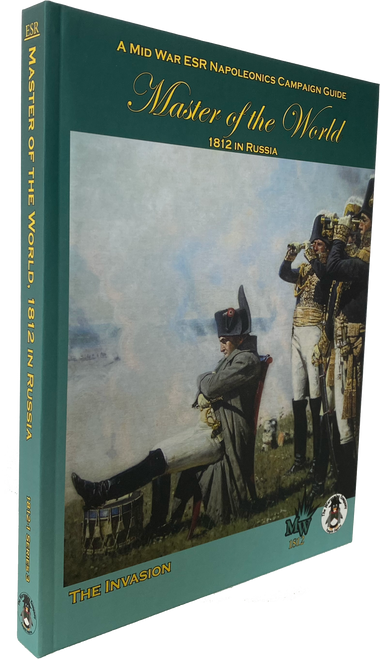 Compatible with both ESR Napoleonics 2nd Ed. and ESR Series 3

Undoubtedly Your Majesty would not make war on Russia solely for the sale of Poland, but rather that  you should have no rival in Europe, and see there nothing but vassals.

Finally, I urged, he would not have gathered such forces in the north, to the detriment of  the Spanish campaign, nor would he have spent so much money in all sorts of preparations, if he had not been resolved to put them to some use, either for a political end or to satisfy his fondest passion.

What passion is that?

Marquis de Caulaincourt speaking with Napoléon Ier of L’Empereur’s intentions in the winter of 1811.

Lead Napoléon’s largest army across the Niemen River and into Imperial Russia, or fight to throw back the French invaders at the head of the Russian Army!

The new Series 3 edition of the first ESR Campaign Guide, 1812-1s3 adds new political maps of the Napoleonic world, operational maps of the theater of war – including the approaches of the opposing forces to the battlefield – and all new scenario maps.

The greatly expanded Uniform Guide offers nearly 3,000 uniform images and adds details such as back views, footwear, drums, sabretaches, and horse furniture; as well as extensive notions on the details of historical units and their configuration or changes during the campaign.

Fifteen historical scenarios may be played individually or refight the historical campaign of 1812: The Invasion.

Master of the World, 1812 in Russia, requires ESR Napoleonics or a similar Napoleonic wargame to play.