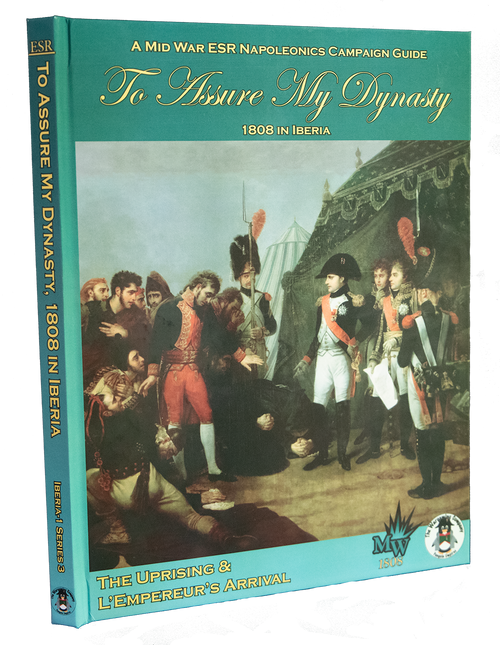 The British Isles are declared to be in a state of blockade.

All commerce and all correspondence with the British Isles are forbidden.

Every individual who is an English subject shall be made a prisoner of war.

All property of England shall be regarded as a lawful prize.

No vessel from England or the English colonies shall be received in any port.

The present decree shall be communicated to the king of Spain, of Naples, of Holland…

Europe turns its attention to the Iberian Peninsula and the tensions between France, Spain, Portugal… and England.

War comes to the Iberian Peninsula!

Lead Napoléon's armies across the plains, mountains, and valleys of Spain and Portugal, or fight to throw back the French invaders at the head of the Spanish Royal Army or the British Expeditionary Force!

The first of the ESR Series 3 Campaign Guides, Iberia-1s3 adds new political maps of the Napoleonic world, operational maps of the theater of war – including the approaches of the opposing forces to the battlefield – and all new scenario maps.

The greatly expanded Uniform Guide offers nearly 2,000 uniform images and adds details such as back views, footwear, drums, sabretaches, and horse furniture; as well as extensive notions on the details of historical units and their configuration or changes during the campaign.

Thirteen historical scenarios may be played individually or sequentially to refight the two historical campaigns of 1808: The Uprising & L'Empereur's Arrival.

To Assure My Dynasty, 1808 in Iberia, requires ESR Napoleonics or a similar Napoleonic wargame to play.